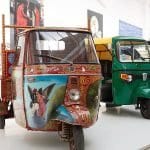 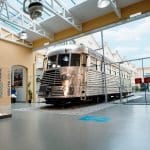 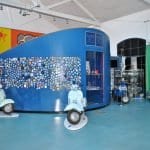 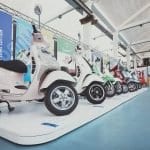 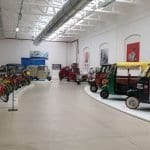 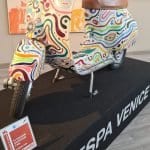 The Piaggio Museum was inaugurated in March 2000 in the tooling department of the ancient factory, one of the oldest and most evocative units of the Pontedera factory complex, where the company transferred its production in the early ‘20s.

The Museum was created to preserve and highlight the value and the historic legacy of one of the oldest Italian companies, and focuses on the reconstruction of Piaggio activities in the area; exhibiting the most representative and famous products and giving access to the rich documentation of the Piaggio Historical Archive, the museum traces a long period of Italian history, a history made of economic transformations, alongside industrial and social development.

Entirely renovated in 2018, up to 20 years of activity and almost 700.000 visitors, the Piaggio Museum has a surface area of 5.000 m², with more than 250 pieces exhibited. It has become today the largest and most comprehensive Italian museum dedicated to two wheels, including many unique examples that do not just tell of the history of the Piaggio Group and its brands, but also trace the history of a country’s mobility and industrial and social development, since the Piaggio story spans the entire history of transport: ships, trains, aeroplanes, cars, scooters and motorcycles have been born out of the parent company and its brands. As such, the Museum is the only one in Italy able to trace the history of a such a highly technological and innovative industry, the evolution of which has marked the history of Italy and Europe.

The Museum halls contain fundamental testaments to Piaggio pre-war aeronautical and rail production, the rich and admired Vespa collection, the Piaggio three and four wheels collection (Ape, Porter, mopeds) and numerous pieces belonging to the motorcycle and sport history of the Group brands: Aprilia, Gilera and Moto Guzzi, which all together boast the brilliant result of 104 world titles in various competitions, from Supermoto to MotoGP, from Trial to SBK.

Alongside the exhibition space dedicated to permanent collections, the Piaggio Museum also dedicates 340 m² to temporary exhibitions, allowing the museum to continuously vary its cultural offer, spanning fields from art to technology, and from scientific disclosure to fashion. Over the years, these spaces have hosted exhibitions, events and works by extraordinary artists such as Dalì, Picasso and, among the Italians, Burri, Nomellini, Viani, Pellizza da Volpedo, Fattori, Modigliani, Carrà, Signorini, Soffici, Spreafico, Nespolo and other major players in the world of modern and contemporary art.

In 2003, the Piaggio Museum and the Historic Archive were awarded Best Museum and Best Business Archive in Italy, during the 2003 Business and Culture Prize-giving.

The rooms of the museum house a number of precious examples of pre-war railway and aeronautical creations, along with the rich and much-admired Vespa collection, the collection of Piaggio two-, three- and four-wheeled vehicles (including the Ciao and other mopeds, the Ape and the Porter), some examples of Piaggio’s products for other sectors (the Moscone outboard motor, the Hidrojet engine, gardening tractors) and the extraordinary collection of products connected with the Group’s motorcycle and sporting history: Aprilia, Gilera and Moto Guzzi, which together boast an amazing 104 World Titles in the various specialist areas of motorcycle racing, from the Supermoto Championship to the MotoGP, and from Trial to SBK.

Another interesting area of the Museum looks at the relationship between the timeless legend of the Vespa and various forms of artistic expression, notably contemporary art and cinema. The core of the exhibit is a real gem in the collection: the Vespa Dalì, a 150 S scooter on which two students from Madrid, Santiago Guillén and Antonio Veciana, undertook a “round-the-world-in-79 days” trip in 1962. In the “mythological” re-interpretation by Volterran artist Mino Trafeli, an elongated Vespa PX with alabaster insets is turned into an authentic work of art, created for an anthology of the artist’s work held at the Piaggio Museum in 2003. This now well-established tradition means the section is constantly expanded and renewed, with the acquisition of new Vespa scooters in re-interpretations by the various artists hosted by the Museum, beginning with the Vespa created in 2010 by Ugo Nespolo for the exhibition The Vespa and the Movies. A separate area is devoted to the cinema – which has played a vital role in building the Vespa ‘legend’ around the world – with a number of vehicles used in well-known movies and a touch-screen monitor where visitors can watch some of the most memorable movie scenes in the history of cinema starring the Vespa: Roman Holidays (1953), Alfie, La Dolce Vita (1960), Quadrophenia (1979), as well as Nanni Moretti’s Caro Diario (1993) and Sydney Pollack’s The Interpreter (2005). The section also presents Vespa interpretations by prominent artists like Giampaolo Talani and Luca Moretto and several Vespa ET4 scooters created in 2001 by young designers for the “VespArte” competition organised by Piaggio.

The museum will be open on Tuesdays, Thursdays and Fridays. Visits MUST BE BOOKED IN ADVANCE BY TELEPHONE. Entry is limited to groups of up to 10 people.
Call +39 0587-27171 to book. Lines are open Tuesday to Friday.

PRICES
Your visit will only be confirmed once a minimum of 5 people have booked. The cost per person is 5 euros.
If you request a private visit, meaning you will not share your guide with strangers, then the total cost for a group of up to 10 people will be 50 euros.
For organisational reasons, guided visits in English will only be possible by booking a private visit, even if there are fewer than 10 people..